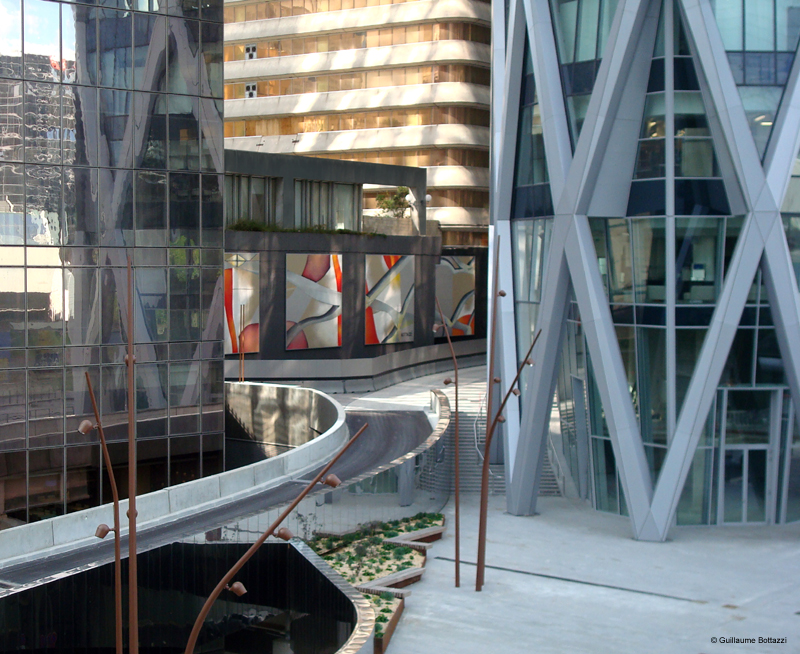 Guillaume Bottazzi, a French visual artist born in 1971, has become well-known for his many monumental “wall paintings”.

Already greatly appreciated in Japan for a giant 900 m² painting produced in 2011 on the facade of the Sapporo museum (the Miyanomori International Museum of Art), the artist was approached in December 2014 to carry out a 216 metre work at the foot of the D2 Tower at La Défense in the Parisian business district.

With this work, he has just completed his 70th work in the legendary site of what may rightly be described as the largest body of modern and contemporary art in the open air in France.

Indeed, the business district is already filled with an impressive collection of artworks as diverse and varied (sculpture, painting, stained glass windows, frescoes, etc) as the artists themselves (from Calder to Richard Serra, including Miro, Bernar Venet, Takis and César). Now there will be an additional work of art at La Défense for people to admire as they walk past the foot of the building.  The work will certainly attract and may even intrigue people.

The most fascinating and intriguing aspect of this work is the surprising, even strange distortion that exists between the apparently cold and neutral material support and the warm, almost enchanting gentleness of the compositions.

The artist usually works on uniform fibre cement surfaces that may sometimes even be mobile (a wall on top of a wall) or a support on a rail. This was the case with the 2013 work he produced on a building in La Ciotat (near Marseilles), more specifically in the district of L’Abeille.

In general, the walls that G. Bottazzi uses are always impressive due to their monumental scale and their coldness. Yet they are never amorphous. They always radiate an internal strength relating to their materiality. Hence they often appear grave and austere, even solemn, in their power.

They often form the envelope and the shell of prestigious buildings (museums) or Business Centres (La Défense) as well as more modest residential buildings (La Ciotat). On the other hand, they all have a frontal presence: the vertical, devoid of a centre, is the obvious sign of elevation to the sacred! As a material, the wall may also evoke something dull, mute and sombre. This is the mysterious medium on which this artist works. In addition, he almost always uses scaffolding, maintaining direct and effective contact with it.

This means that G.Bottazzi can contemplate the wall constantly, following the example of Bodhidharma, known as “the wall-gazing Brahmin”, who founded Chan, the Zen of Japan. The special attraction that Japan holds for this artist is easier to understand now! The same Brahmin spent 12 years meditating in front of a wall in order to attain enlightenment, in other words perfect insight into reality. Consequently the wall we come up against, that we Westerners think of as empty of meaning, is experienced differently in reality by the Zen practitioner.

For him, the importance lies elsewhere, in the transmutation of the wall into enlightenment. Indeed, for mystics, darkness and enlightenment are one and the same thing. And, in the end, isn’t this distortion or opposition that we thought we perceived between the coldness of the wall and the pictorial warmth of the work just as absolute? Hence the other, not insignificant, question: in his own way, has the artist not also taken a path similar to that of the Brahmin?

Could this explain the clearly enlightened nature of his painting? But without the pretension of supplying a definitive, unequivocal answer, the debate will continue. In spite of this, we may say without any hesitation that this artist’s painting seems to marked by an experience comparable to that of Zen. 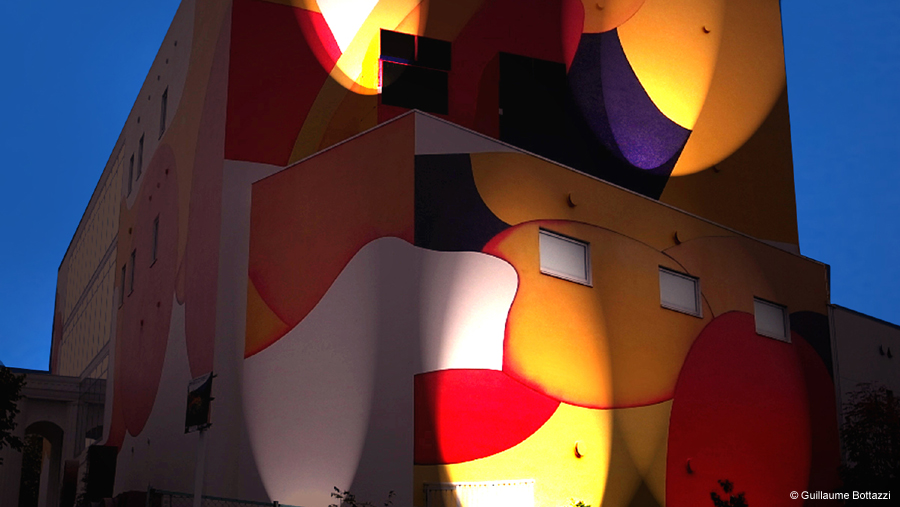 All the more since such a statement has the benefit of making the work of G.Bottazzi, more recognizable, especially the work at the Sapporo Museum (see above).

The latter resonates like a powerful, colourful hymn, full of hope and optimism, just like the bulbous shapes that are harmoniously entangled and intertwined. They surprise us, seeming to want to fly away, like Montgolfier balloons leaving the ground to soar up into the sky.

This invitation to a voyage reveals the phenomenon of transmutation that has been considered previously. A transmutation that leads to the profound transformation of one substance into another and to movement from one world to another. This confirms the statement by the psychoanalyst and anthropologist Olivier Douville, who has perceived an identical appeal, asserting that: “Large painted walls look like steamers coming towards us, inviting us on a voyage; they brighten and uplift the tones and rhythms of urban space.”

In addition, as though to facilitate the same odyssey, G.Bottazzi uses his tried and tested glaze technique to soften a kind of pictorial severity and permit the voyage to be smooth.Inhis own words, “It brings a great deal of gentleness to the painting”. His painting really cannot be reduced solely to anecdotal detail. By giving priority to movement, G.Bottazzi quite simply includes his work in a more vast and more prestigious artistic approach, since it follows the path first taken by a certain Kandinsky.

This marvellous painter in fact chose abstract painting transformed by change and movement instead of fixed geometric shapes.

Abstraction based on movement and change

Contemporary abstraction very quickly developed two opposing trends, one based on geometric shapes and the other on organic forms.

The two approaches corresponded to two very different views of the nature of reality. The geometric abstraction that is a part of Platonic philosophy should lead to more formalist painting, to “art for art’s sake”, in accordance with the concepts of purity formulated by the American art critic Clement Greenberg. Art that is free of all forms of narration, representation and subject matter. This was the direction taken by abstraction and freely developed by the De Stijl movement with Mondrian, but it is also expressed in more static geometric works such as those of Barnett Newman and Mark Rothko.

Although Kandinsky was just as fascinated by the mystic aura of geometry, in his view abstraction revealed quite a different reality. It was based principally on movement and change and related to living things. This great painter led the way to organic abstraction.

We discover the same vision of abstract art with G.Bottazzi too, first of all in his shapes with their softened and “natural” edges; and then in those that look like living organs. The artist loves life and has no hesitation in saying so in his painting. The body is often evoked even in shapes that are allusive or simplistic such as those resembling an embryo or a foetus (see the 2008 canvas later on). In reality the painter favours metamorphoses of all kinds. They stimulate his imagination and give meaning to his art.

Nevertheless movement and rhythm remain restrained with G.Bottazzi. He always tempers his emotions. 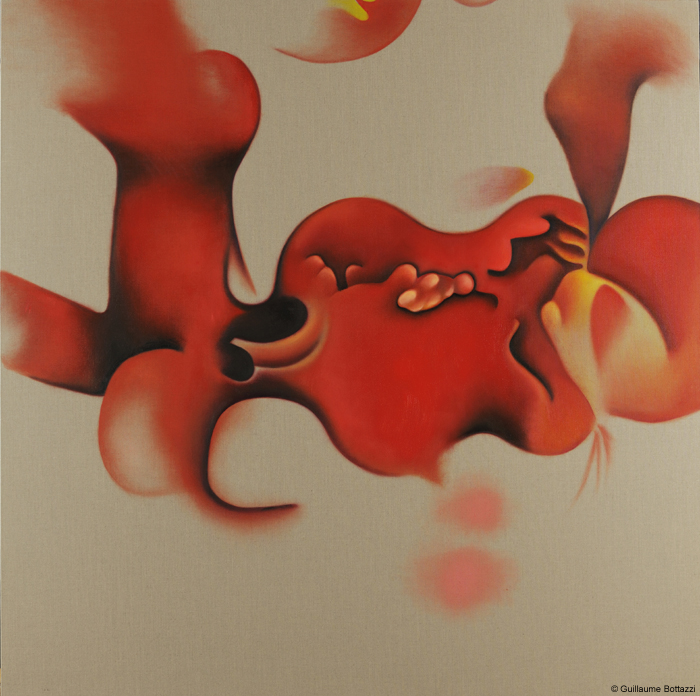 Unlike the incisive and intrepid gestures that we find in the work of Koning or Pollock, the work of G.Bottazzi is related more to the disciplined and rhythmic work of an Oriental calligrapher. Sometimes, like many current painters, the artist blithely cross the borders between the organic and the geometric and rediscovers lost visual pleasure.

A return to Op Art and the idea of beauty 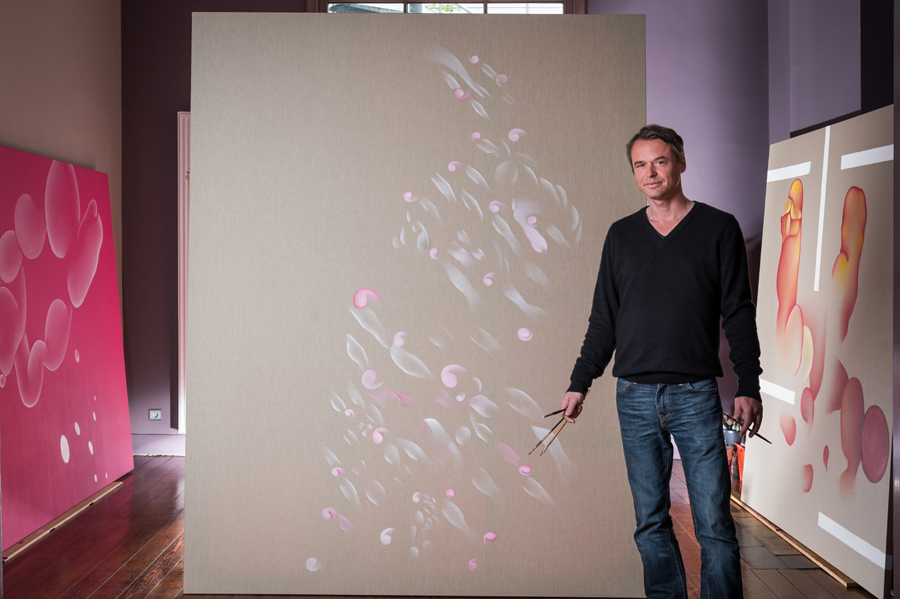 In the 1960s, following the lead of some American painters who rejected the puritan principles of the purity of geometric abstraction, many artists joined the figures of organic abstraction.Their concern was to rediscover the joys of aestheticism. In fact all these abstract painters, such as Brice Marden, often “mix together”. Most of them go on to use organic abstraction to mark their return to Op Art. Philip Taaffe and Roos Bleckner rehabilitate a type of art that tends towards beauty. Similarly, we find an identical approach to Op Art with G.Bottazzi. In some of his works, the artist uses vibrant surfaces with the obvious aim of cultivating the “spirit of the eye” (l’esprit de l’oeil). He has no hesitation, either, in mixing the geometric with the organic for sheer pleasure!

The artist remains an ardent advocate of floating compositions that make use of all the techniques of perspective, not to mention spatial illusion, in the manner of Al Held. Hence the various evanescent patterns that often seem to be suspended in a zone of weightlessness.

In the last canvas, the artist has created an area that is just as magical, still with floating organic shapes and a perspective of depth. This results from the arrangement of the motifs that pirouette and sometimes secretively appear to conceal themselves. This gives rise to an almost unreal beauty close to minimalist austerity. But there is still one question: isn’t this need to return to beauty anachronistic nowadays?

Art currently no longer claims to enchant, since, according to Jean Cocteau, “beauty limps”! Yet Dostoevsky’s statement that “beauty will save the world” has never been more true and justified than nowadays. This message is carried and idealised by artists especially who, like G.Bottazzi, enrich the world through this attraction to beauty.

Even though the nature of contemporary art is above all to question, even to shock, art will always fundamentally remain an expression of beauty related to passion.

From one generation to another, it is stronger than they are and they remember that the search for beauty starts with terror, the dizziness of the solitude known to each person who enjoys their freedom. One day the person who sees that “life is worth nothing”, also discovers that “there’s nothing like life”.” (Bernard Bro, “La beauté sauvera le monde” (Beauty will save the world), pub. Cerf, 1990, p.364)